One of the recent Rainy Day Bites Cookbook Club challenge options from Zoe Bakes Cakes was the "dacquoise with cream and berries." Originally my plan was to make the "raspberry charlotte royale" but then waited too long, so I had time to make one recipe but not the ingredients. Time to get creative! I had plenty of cream for a dacquoise, and plenty of raspberries, but no lemon curd. I've had a container of Ovaltine in my pantry for a while (not a paid advertisement, by the way), ever since reading how Joy the Baker uses it to make a silky chocolate buttercream. I had it as one of the options for a birthday cake I made in February, but went a different direction.  So I started thinking if Ovaltine powder would dissolve enough for a buttercream, maybe it would work in a whipped cream as well. 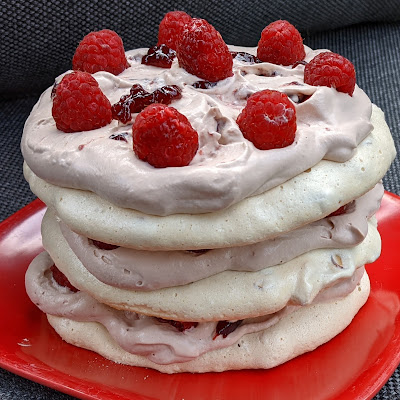 So this isn't really a recipe as much as it is a formula. I also didn't want to make a full size dessert since I'd have to eat it all myself, so I cut Zoe's recipe in half. 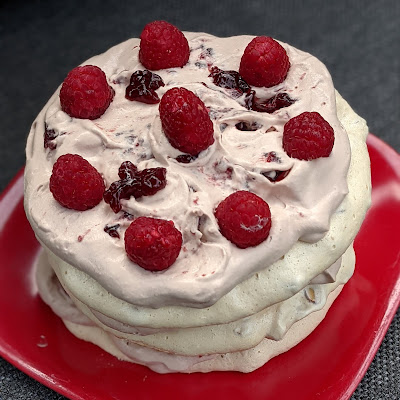 I traced a cereal/soup bowl three times onto one sheet of parchment. I still baked it around the same time as the larger ones, maybe 5-10 minutes less. This made four perfect servings, one of which I had for breakfast two days after I made it (dacquoise really doesn't last that long, pro tip.)

I used the recipe from the cookbook, the only change I made was cutting it in half and using slivered almonds I had on hand instead of toasting my own. I thought about using pecan flour again but since I was using almonds anyway, I went ahead and used almond flour. I'm not sure I beat it quite long enough but it still baked well; I wish I'd formed the layers a bit more evenly so the stack would have been less uneven.

For the whipped cream, I used 1/4 cup Ovaltine powder to 2 cups heavy cream. I was uncertain if it would cause any problems so I started low. It did take longer to whip the cream, but it eventually got there. I think more Ovaltine would have been nice, probably not more than 1/2 cup to 2 cups cream. Alternately I could have added some powdered sugar. But I also liked that it wasn't overly sweet, since the dacquoise and jam are both very sweet. I thought about mixing the jam into the whipped cream but instead I globbed it on and attempted to swirl it in some - I should have thinned it out a little to make it fancier. I also could have put the raspberry jam down before the whipped cream, but I wouldn't have wanted to use any more than I used, and then it would not have been visible. It really does help break up the bland color. And then, of course, fresh raspberries.

The malted cocoa flavor in Ovaltine might not go with all the fruits, but I was thinking it would also be a nice option for spring, around Easter time, when you can get those malted robin eggs. Crushing those up in the dacquoise would be a stunner! Maybe I'll remember and bring this idea back around. You can see what other people made by following the #rainydaybitescookbookclub hashtag in Instagram.