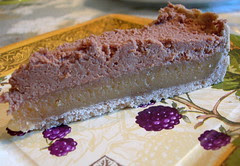 For the recipe, please see the related entry in Veronica's Test Kitchen, one of the hostesses for this month's challenge.

Tarts can look deceptively easy, particularly when dealing with caramel, and dry caramel at that. This recipe caused some frustration, but no tears this time. Just laughter - at myself, at the potential ruin of yet another pan, and realizing that it was probably wise to pick librarianship over baking as a career path.

For my first feat, I tried making a crust recipe in a food processor that was about 4 cups too small. I forget that I don't have the biggest one and that most recipes are probably written for a larger bowl. Halfway through I had to dump everything into a bowl and mix it by hand. It seemed to work okay, but was pretty dry. After chilling the dough, it didn't want to roll out very easily - I was able to make most pieces equally thin at least, as you can see in the crust, but had to piece it together quite a bit. One benefit to this recipe was the use of hazelnuts - I had a few cups of hazelnuts in the freezer, left over from the annual bag my Mom sends me from Oregon so I can make holiday treats with the same flavors I grew up with. It was nice to have a reason to use them, although lately I've been sneaking handfuls for snacking, so I imagine the rest won't last long. 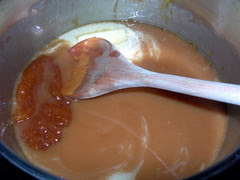 For my first batch of caramel, I did as the recipe instructed and didn't stir the sugar. Since there was an entire cup, the bottom of the sugar got extremely hot before it all dissolved. As a result, adding the cream made the mixture seize up. I knew it was possible that continuing to stir the mixture might bring it back together, but I decided to quit while I was ahead. Batch #1 - in the trash. 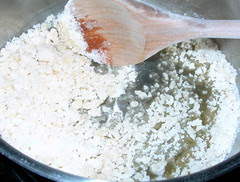 This batch of caramel goes in the "I should have known" category. Promptly after washing the pan and wooden spoon, I went about trying another batch of caramel, but the spoon still had water in it. Hello, sugar crystals. Another batch bites the dust. 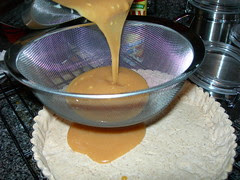 At this point I decided it couldn't hurt to try one more time. I didn't have any karo syrup so I couldn't try the "wet" method of making caramel that one of the Daring Bakers had suggested. So this time I used a different utensil, stirred a little at the beginning, got a few crystals, but simply strained them out as I poured the mixture into the pan. The color seemed right, a golden brown, so I decided to try baking it. 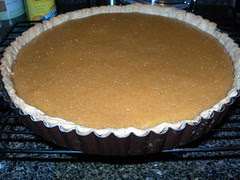 To my pleasure, the caramel layer seemed to bake up nicely. The crust also didn't get too brown, which was nice. 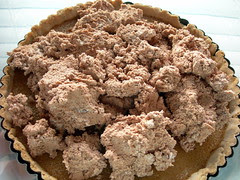 The next step was making a milk chocolate mousse. So many good chocolates are out there to select from, and this time I used Lindt Extra Creamy. I was making this tart the night before, and didn't want the crust to get soggy. I decided to make the mousse ahead of time and store it in the fridge until the next day, which unfortunately meant that it set up a great deal. Here you see the texture of the mousse the next morning as I tried spreading it on the tart. It eventually warmed to the touch of my fingertips and I was able to press it down somewhat smoothly, but it lacked the creamy texture it would have had if I had spread it right after making it. It still tasted really good! 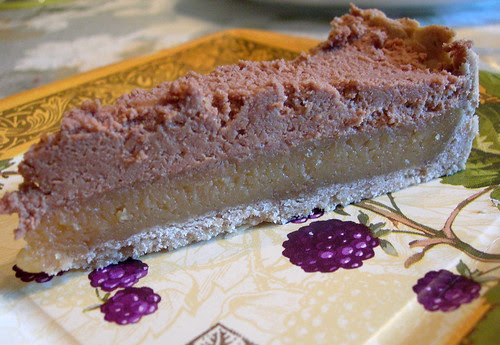 The end result was a pretty tart, which I cut into 16 pieces to serve. I agree with the other Daring Bakers about the cinnamon in the crust being overpowering. One co-worker friend said that she thought the slightly browned sugar taste in the caramel added a lot of depth to the taste, and I would agree. Another co-worker said that if I had added peanuts to the caramel layer, it would have tasted like a Snickers bar.

My original intent was to make a dark chocolate version, but I was not impressed with the crust, and the event I was planning to bring it for was cancelled. So for this one, only one whole dessert, but three batches of caramel! 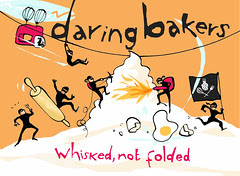 This entry was brought to you by the Daring Bakers. Please check out other renditions of this tart by going to the blogroll listed on the left menu of my blog.

Oh Jenny! Even with the hurdles you mastered it so well! Bravo!

Looks good. You probably could have added your mousse. My tart did not get soggy and sat over night.

Well done Jenny! I like how your layers are so clearly defined. It was a real yummy tart wasnt it!!!

I also tried the straight method in making caramel but it didn't work for me. Your tart is lovely and I'm glad you liked it :)

Oh, sorry that the caramel gave you such trouble, but at least the finished tart looks great! :)

Lovely tart Jenny! I agree that the browned caramel adds a depth of flavor.

Jenny, I'm sorry to hear you had problems with melting sugar. I have been making caramel since I was 13, so I come to find it normal, I guessed I shouldn't!

Lovely results in spite of your described travails with the caramel. And you were so fortunate to have a place to take it to share. I love to do that, because I receive a lot of feedback -- also part of my learning.

Well, even if it took you 3 tries, at least you finally had success!!

Caramel can so tricky, but I'm glad your tart turned out - and so nicely too!

Way to go Jenny! Your perseverance really paid off.

Well done, jenny! You perservered with the caramel and did a fabulous job.

It looks gorgeous! lol at another batch bites the dust!! :-) I love the Daring Bakers challenges, and I look forward to reading about them every month. My hat's off to all of you.

Looks great! Dry caramel works great in a large and shallow saucepan so the sugar is in one very thi layer. You did a beautiful job!

Jenny I had to do the caramel 3 times too! I'm sure glad this challenge is over.

May have taken 3 times, but that is impressive looking caramel Jenny! I had the same issues with the first batch seizing up, but I just strained out the solids, reheated them, then whisked the rest of the liquid back in. My caramel didn't turn out as lovely as your did. Good job!

Congrats on sticking it out with the caramel. I had one go at the dry method and then quit like a big quitter.

You made a beautiful tart. It looks delicious.

Looks great to me! Did you find yourself at any point asking why you put yourself through this?

Your tart looks great. Your layers are so perfectly even. Three batches of caramel - you have staying power. Wendy

Your tart looks perfect Jenny. I'm very impressed you kept on trying the caramel again and again - you must have the patience of a saint.

Man alive!! I had a super bad sugar craving last weekend but didn't have anything in the house except for actual sugar. I almost made caramel, but then realized it was 1am, and maybe my time would be better spend sleeping.

But, I really want to make caramel. Did I understand correctly that you used the dry method? I was reading about the wet method, and they say it's really easy. I'll have to try them both.

Good for you for sticking it out! Loving that thick layer of caramel...

I'm thinking that caramel is a live and learn thing, and that it's impossible to get right the first time. That said, you did a great job!

Your tart looks delicious! Good for you for trying the caramel multiple times!

Sorry you didn't seem to like this one. I do seem to be the only one who enjoyed the 2 tsp of cinnamon.
What'll it be for September!!

Oh yum!!! It looks great! I agree, the slight bitterniss of the caramel cooked this way, adds depth to the taste.

I think your tart turned out great. Interesting idea about turning it into a snickers tart, sounds yummy

I love that as I read other people's experiences with a challenge, I learn more than I do making it myself. Thank you for sharing your story!

Wow, great! It's good to see people like you who never capitulate and try until they get to the desired result...
A beautiful tart!

WAY TO STICK WITH THE CARAMEL!!! Great job Jenny!