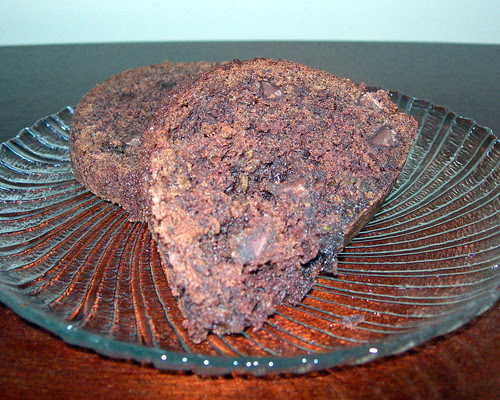 Every time I travel, I try to buy a cookbook. As a result I have quite the regional cookbook collection! I often make piles of cookbooks to go through when I bring home an ingredient without a specific plan for it. This weekend, it was zucchini from the farmer's market in downtown Greenville. I was hoping for some kind of fruit, but we must have hit it post strawberry/rhubarb season but too early for blueberries.

It isn't like I've never made chocolate zucchini bread or cake before, but this recipe in particular comes from Clayton Farms B&B in Grinnell, IA. The recipe is from the Sampling Iowa Treasures Cookbook that I purchased from the only bed and breakfast in Prarie City, IA - Country Connection. Nathaniel and I stayed there as we moved across the country from Oregon to Indiana. It was a memorable day, because we managed to find enough time to go to the Iowa State Fair in the hottest weather we had ever experienced, managed to blow out the tires on the car we were carrying behind the moving truck (forgot to take off the emergency break), and the people running the B&B had an interesting conversation philosophy. I don't remember specifics, this was 2000, but I remember the breakfast conversation being very morbid.

Still, I may never visit Iowa again. But it can be nice to visit via my Iowa B&B Cookbook!

Beat eggs, oil, sugar, and vanilla together. Stir in the zucchini. Mix together all the dry ingredients and add to previous mixture. Mix well and pour into two greased and floured 4x8x2 inch loaf pans. Bake at 350 for one hour or until it tests done.

* I was out of veg oil, so I used half butter and half olive oil. As moist as zucchini is, I was surprised to see such a high fat content in this recipe! I need to learn more about making recipes more healthful.

I also baked this in a bundt pan, because I hate my silicon loaf pan.

I have to admit that this recipe feels so boring to me, but only because I've had it a million times. It doesn't mean it is any less delicious. I'm in the middle of moving to the first home we've ever bought, so I had to grab something quick. Next week, depending on how together I am, you may see the first post from my new kitchen. In the meantime, please go to absolutely favorite baking blog, Cakespy, to see how they turned garden vegetables that aren't typically featured in baking into tasty treats. You won't regret it. (I'm still waiting for my brussel sprouts cupcake, personally).

ETA: This is my 100th post! Happy 100th post to me! I'll be celebrating my 2nd anniversary soon of blogging, so stay tuned!

Hi, your bread sounds delicious and the scones below look simply delectable! Thanks so much for taking the time to post those. I am 17 and live in tennessee. I am new to this blogging deal and would really appreciate if you have any suggestions! Thanks so much and have a blessed day!

Hi,
The bread looks lovely I'm definately going to try it. I have a different chocolate courgette (zucchini) cake recipe and it's a bit too sticky for me - your recipe looks perfect!!
Thanks

That is an interesting cake! I've never had chocolate and zuchini together but I must admit it looks great!