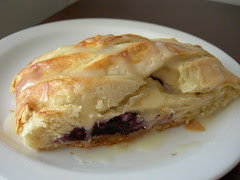 Slice of finished pastry
Originally uploaded by watchjennybake.
I had made the Danish Braid from Baking with Julia last January, so when the June Daring Bakers Challenge was announced, I felt ready to meet this challenge head on. This time the recipe comes from The Secrets of Baking by Sherry Yard, and can be found at one of the two host(ess)'s sites for this challenge - Kelly from Sass & Veracity, or Ben from What's Cooking?.

I have a history of procrastination for challenges, but this time I had a really good excuse - we moved during the month of June! This is the first time I have owned a home, so it is all very exciting, and this was only my second baking project in my new kitchen. I am a little more hesitant to get this one dirty, but seeing how it has been cleaned successfully several times now, maybe I'll get over it. 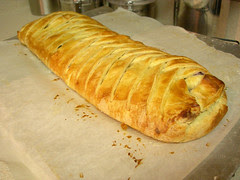 I did not start the dough until 10:30 last night or so, which was a MISTAKE. After the dough comes together, you have to roll it out, fold it up, and let it chill again 4-5 times. Thank goodness some friends were online to talk to me until 2:30 this morning, or I might have had an entirely different end result.

To me the main difference with this dough compared to Julia's recipe is that this has orange and cardamom in it, and I really noticed it this morning after the dough had chilled its minimum five hours and I was rolling it out to make it into the braid. 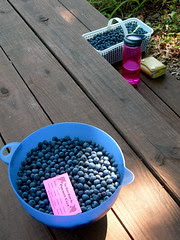 Friday, I took the day off, and spent the morning picking blueberries at The Happy Berry in Six Mile, SC with some friends. I knew I wanted to use them somehow with this baking challenge, because seasonal local produce can't be beat! Down here in South Carolina we passed strawberries and rhubarb long ago, and are barreling down the path toward peaches at this point, but that means that blueberries are perfectly in season. I found a random blueberry filling recipe and cream cheese filling recipe online, but since that was after four and a half hours of sleep, I'm not sure I can find it again. Somewhere on the internet, but they proved sufficient. I deliberately undercooked the blueberry part, wanting to make sure we could still taste the freshness of the berry. 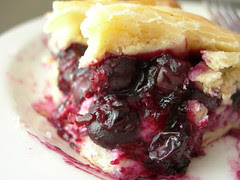 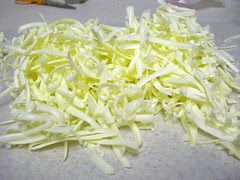 The biggest misstep I made in this recipe was the beurrage, or butter block, stage. After seeing so many entries today, I see that it should have been more of a spreadable texture. But if you start with cold butter, and only have a Sunbeam mixer, nothing cohesive was going to happen. So I actually ended up grating the butter, mixing it with the flour, and sprinkling it on the dough during the first roll out. I feel like that worked pretty well, and it never got too warm to work with nor did it poke out of the sides, but I wonder how the end result would have been different if I had done that part more accurately.

Now to figure out what to do with the other half of the dough - I've seen some great examples of bear claws and chocolate croissants, I need to try one of those!

YUM I so wanted to do blueberries but had eaten mine all. Looks great!

Nice job on your braid and congrats on your new home!

My lord, that looks good. Can you e-mail me a piece?!

I love the blueberries. They held their shape really nicely. Good job getting creative with that butter.

hey, yanno, the best thing about the challenge is what you learn :) now that you have a fresh perspective I bet you'll be baking lots and lots of these :)

I love the filling you used! Delicious! Great job here!

Looks real good. And do definitely make some croissants. Mine turned out the best.

oh yes - the blueberries is the nextthing i want to try with this braid. lovely braid!

Oh wow blueberries and cream cheese what a fantastic filling. I would never have thought of that but I'm longing to try it now.

I thought that your idea of grating the butter was a good one - and I must say that spreading things wasn't that easy, even with it all at pretty much room temperature: the dough is so delicate that spreading wasn't very nice at all.

Glad you're breaking in your new kitchen!

Great idea about grating the butter. I love the glaze on your braid. Question: WHAT are pickled blueberries? I've never heard of that!

Congrats on the new house!!!! I have a freezer full of blueberries we picked this year, but my daughter over-rode them and requested raspberries!

The braid is beautiful and I love that you used blueberries. You're right - starting at 10:30 p.m. means pulling an all nighter or pretty close to. But what a fun challenge this one turned out to be.

those blueberries look super delicious! they're one of my all-time favorites.

The last of the blueberries were at my farmer's market this weekend -- I bought a quart with the intention of freezing them for future use, but just 24 hours later, they're half gone!

Geez, those shots with the blueberries are amazing...and your braid is perfect!

Nice one!
-Susan of http://doughmesstic.blogspot.com

Lovely job! I wasn't that thrilled with the spreadable butter myself and your idea to grate was pretty darn good.

Looks great. I grated my butter as well. The blueberries look fab, you are fortunate to have a place to pick them near by.

By the way, I tagged you for a meme. If you want to play along, just visit my blog to get the rules!

Oh, those berries look so good! Lucky you.

Your shredded butter technique is a great tip for too-cold butter; thanks for sharing!

And that picture with the blueberries oozing out of the braid? Oh. My. Gawd. I want some! :)

Your braid looks so good, and the blueberry filling!!! Yum. Kudos to you for sticking through the wee hours of the morning to finish the dough. I don't think I would have made it.

What a great way to break in your new kitchen! Your braid looks fabulous, and I love the photos you took of it--they're so clean and sharp!

I've never picked blueberries. I always imagined that it would be fun!

Woooo! Look at those gorgeous blueberries! Nice job on your braid, it's beautiful.

The braid looks, and the filling sounds just great!

Hi, Jenny! Your braid looks awesome! I am a fellow foodie/G-ville blogger. I found your site through foodbuzz.com.

Grating the butter? How clever :)

Making this tomorrow--can't wait to try it!

Oooh - fresh picked berries sound like the best filling! Your braid looked great!
I was tagged by Alexis of Baking to Destress with a meme, and I'm passing it on to you! See my blog for details!