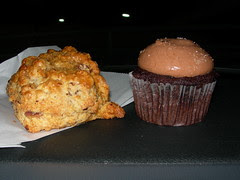 Scone and Cupcake
Originally uploaded by watchjennybake.
We stopped by Baked in Charleston, SC, on our way back home from a cruise. I'd been looking forward to it because I have this way of idolizing New York City bakeries and was excited when I learned this particular Brooklyn institution decided to open in Charleston as well.

The first thing I noticed when we walked in was the number of people sitting outside on their laptops, an even bigger mystery when you realize how much seating is available inside and how humid it already was outside. I love the space they have, and they have a good location downtown. The second thing we noticed is that they take up more space selling merchandise than baked goods - an entire wall of t-shirts, cookbooks, and other paraphernalia; while some of the baked good selection was on the slimmer side. To be fair, it was already 10:30 AM on the Saturday of Memorial Day weekend and the start of the Spoleto Festival, and they might have been a bit cleaned out.

Since it was morning and we had iced mochas from Metto Coffee (in Mt. Pleasant, where we always stay), I got a scone, but then wanted to try one of their cupcakes since they sell a lot of cakes and cupcakes. The scone was okay, a little on the dry side despite the glaze, although the pecans inside were delicious. The cupcake wasn't the best texture (a little dry), and while I don't want to use this particular bakery review to rail against a trend I hate that is going on in baking right now, I might as well take the opportunity. When candy makers started adding sea salt to caramels, I was into it. The super sweetness of a caramel has an incredible depth added to it with a little sprinkle of salt. Everything else just tastes SALTY. Quit it!

I think almost everyone would get something tasty at Baked in Charleston. The biggest hurdle with me was the sneaking suspicion that everything was similar to my baking style, but that I felt my versions were a little better. I can't fault them for having my taste though, and think you will enjoy it. I love how there is space to sit and enjoy their goods or the company of others, and it isn't just a walk-in/walk-out bakery. I hope they do succeed in their venture outside of NYC, and will keep following them on Twitter to cheer them on.