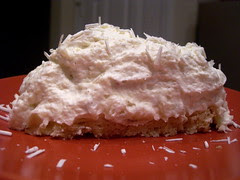 Soby's White Chocolate Banana Cream Pie
Originally uploaded by watchjennybake.
I just had friends here from Oregon, and wanted to cook a southern dessert. Red velvet cake seemed too heavy, and I got great suggestions like pecan pie and sweet potato pie, but then I started thinking about banana pudding. Banana pudding is the quintessential southern dessert, particularly when one is having collards, grits, and pork from Henry's Smokehouse like I was planning. But I couldn't just make banana pudding!

Luckily I recently checked out the Soby's New South Cuisine cookbook from the library and found this gem, the white chocolate banana cream pie. According to the book, it has been their top selling dessert since they opened in 1997. Soby's is one of our favorite restaurants in Greenville, in a beautiful building downtown. They always have good service and excellently prepared food, but it does tend to be busy (and louder). This dessert seemed like a classier take on banana pudding or banana cream pie (because actually this is a tart), so I decided to give it a shot.

This is typical of restaurant recipes because so much of it can be made ahead of time. I made the crust and pastry cream two days in advance, so the night we ate, I only had to whip the cream, slice bananas, and mix a few things together. This was sweet, pillowy, and delicious. The banana flavor was prominent, and the vanilla flecks throughout were pretty.

For the tart shell: Place the flour and sugar in the bowl of an electric mixer fitted with the paddle attachment. On low speed, add half the cold butter and mix for 30 seconds, then add the remaining butter. Continue to mix until all the butter is cut into the flour and the mix resembles sand. Lightly beat together the egg and vanilla in a small bowl and add it to the flour and butter. Continue to mix until a dough ball is formed. If the dough does not form a ball after 1 minute, add a few drops of water. Remove the dough from the mixer. Wrap in plastic wrap and chill.

Preheat the oven to 350 F. Have ready an 11-inch removable-bottom tart mold. On a floured surface, roll out the dough into a 1/8-inch thick circle large enough to fit the mold. Press the dough into the tart mold. Refrigerate for 10 minutes. Bake the crust for 16-18 minutes or until it is golden brown and crisp.

For the pastry cream: Pour the milk into a heavy bottom 2-qt saucepan. Split the vanilla bean in half lengthwise and scrape out the seeds with the back of a small knife. Add the seeds and pod halves to the milk. Heat the milk until it is about to boil. While the milk is heating, whisk together the cornstarch, sugar, salt, and eggs until smooth. Tempter the egg mixture with one-quarter of the hot milk and then add it back to the pan. Whisk to combine. Continue to cook on medium heat stirring constantly. When the custard thickens, remove it from the heat and whisk in the white chocolate. Pour the pastry cream into a container and place a sheet of plastic wrap directly on top of the cream so no skin forms. Refrigerate until completely cool.

For the pie: Whip the heavy cream until soft peaks form. Add the sugar and creme de banana and whip to very stiff peaks. Place the cold pastry cream into another bowl and soften by mixing it with a rubber spatula. Slice the bananas into the pastry cream and stir to combine. Fold in the whipped cream. Mound the filling in the middle of the tart shell and smooth it down to the edge. Carefully cut the pie into 8 or 10 slices before garnishing. Using a vegetable peeler, shave enough white chocolate curls to cover the pastry cream. Dust the top with cocoa powder. Serve immediately or refrigerate.

I think I gained 10 pounds just looking at your blog, fantastic

Rich and light - a crazy contradiction, but it sounds wonderful! This will have to be made for my step dad's birthday I think :)

that pie sounds/looks amazing! I would move to the south for a slice!

was just there - it is the best pie in the world

Where did you get creme de banana?
Thanks!

Creme de banana was from the liquor store. I now have a huge bottle of it, they didn't sell it in tiny ones!

Just so you know - I just made two of these - they were JUST like the ones at the restaurant. :) I didn't make it to the liquor store, so I used banana extract (McCormick from Wal-mart), and it worked great. Thanks so much for posting this! :)

I have made this many, many times. My niece requested it for her 20th birthday rather than cake. I have made the recipe "mine." I make the crust with chocolate wafter cookies and instead of the creme de banana, I use triple sec. Just delicious!