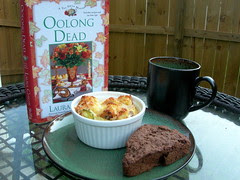 Oolong Dead Tea
Originally uploaded by watchjennybake.
I'm a huge fan of the Tea Shop Mysteries by Laura Childs, and was happy to read Oolong Dead recently. Theodosia Browning, owner of the Indigo Tea Shop in Charleston, comes across a dead body while riding her horse, and has a mystery to solve. Incorporated throughout the book are mentions of dishes that are often found in the back of the book that you can make yourself.

I declared tonight Oolong Dead Tea night, and made two recipes from the back of the book. With the Vegetable Egg Strata and Chocolate Sour Cream Scones, I prepared Oolong #8 tea from Adagio. 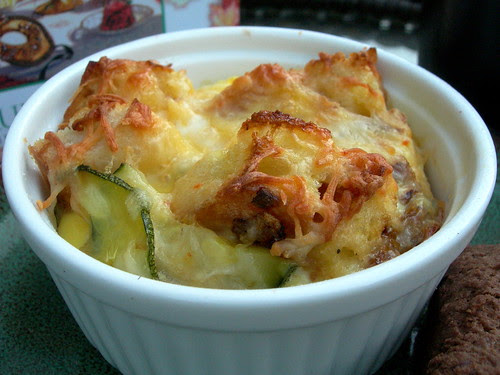 I followed the recipe for the Vegetable Egg Strata except I left out the red peppers, and put the mixture in 6 ramekins instead of one square pan. I wanted the look of the individual servings, so I 1.5x the egg portion of the recipe, and ended up only baking them for 25 minutes. The eggs were just done, but not tough.

I had been given garden-fresh zucchini earlier today, so it was the star of the strata, as was the roasted garlic bread that I cubed up to put in it. This is a great recipe for using up leftovers, and could be adapted to practically any veggie/meat/cheese/bread combo. 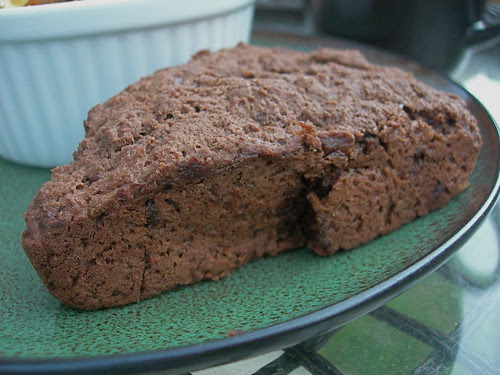 The chocolate sour cream scones were interesting. I have made scones with tofu, cream, and buttermilk before, but never sour cream! Against my usual scone method, I actually had to stir and knead them quite a bit to get the dough to come together, but it did not seem to have a negative impact on the final result. In her newest series, of which Eggs in Purgatory is the first, there was a recipe for sour cream biscuits with three ingredients. I made those as well, and they were a similar texture. I liked that they were easy and I always seem to have sour cream on hand!

I'm a sucker for a novel that comes with recipes. What is your favorite?

I recently read a novel called "Eat Cake" about a middle-age woman who loves to bake cakes and uses baking as her coping mechanism. the book includes several of the recipes that she makes--i haven't tried them yet as my mom is borrowing the book, but they all look wonderful!

Fun! By the way, based on your recommendation I bought Eggs in Purgatory from Amazon. I was ready to try something different. Haven't started it yet, though - still working on Anna.

Both of these things look great! I'm reading Cooking for Mr. Latte off and on these days. It's a cute book about a food critic and her new boyfriend. The book is absolutely full of recipes but I have yet to try any of them. The ingredients are sometimes a bit out there. :)

Quite the "eye candy" on your blog! I will definitely be back!

You're invited to stop by my blog any time :)

Actually, I don't think it was Tide and thyme - I think it was Nutmeg Nanny! I have way too many windows open ;)

I am brand new to this blog thing, and was skipping enviously around when your blog caught my eye!! You asked about novels with recipes in them... I read a series of books by Jan Karon called the Mitford Series. It is a wonderfully sweet and addicting story about a small town based in the mountains of NC. She also published a Kitchen Reader from this series, all because the characters cook ALL the time and when America fell in love with the characters, well... they had to have the recipes!!! I have made several of the recipes and they are fab. There are alse excerpts from the book to accompany the recipes, as well as tips and tricks to make recipes turn out perfectly.
Love your blog!!!