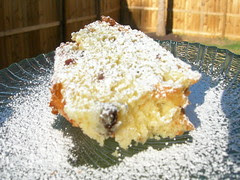 I read this book, I really liked it! Did you know the author has another book about a dying food critic's quest for an elusive flavor? I was actually thinking that one would make a good choice for foodie book club.

I had kugelhopf when I was 16 on my first visit to France and I think I was traumatized, it was so dry we were choking it down. I'm sure yours was much better, but I still have a mental block about trying it again :)

So what exactly is a kugelhopf pan supposed to be like?

I'm scared of the post-apocalyptic cuisine idea... Will it involve cockroaches? Ewww

mlle_noelle - Dorie says it is meant to be eaten as soon as it comes out of the oven, and even then I found it a bit dry. Pouring melted butter over the top does help quite a bit. Once we thought of it more like bread than pastry, it was much more enjoyable.

Mary - A kugelhopf pan is kind of like a turban with diagonal swirls. The blog I linked to has a picture. It is pretty but then I'd have this kugelhopf pan....

Mmmmm! I wish I could try your Kugelhof. I think it's really cool that you found a recipe and made it for your book group. It looks delicious.
And I think the book is having the same effect on me- I'm having fonder feelings toward it as some time passes.