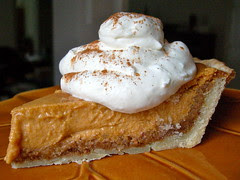 I'm with you on being underwhelmed by pumpkin pie. The closest I've gotten to finding something I like was actually a layered pie- bottom layer was cheesecake, then a thin layer of pumpkin pie. I'm sure that doesn't count.

It does look very pretty, though :).

What a pretty pie slice!

I like pumpkin pie well enough, but I'll agree that there are better pies out there.

This looks really good. I'm curious about what you did with the rammekin of pumpkin pie? Did you just cook it until it set? Did you put pie crust on the bottom? Thanks!

Mel - I put some of the extra gingersnap/pecan mixture in the bottom, and just cooked the ramekin until it was set, probably 10-15 minutes before the pie was ready.

Jenny-- Thanks for the ramekin info! I know I will have leftover pumpkin pie mix when I make mine tonight. Glad I have something to do with it now!

I made the pie according to directions, and it was WONDERFUL! The ginger snap/pecan layer on top of the crust is actually enough to make 2 pies.

Hey Anonymous - Did the recipe say that the gingersnap mixture was for 2 pies? It definitely seemed to be!

Jenny thank you so much for the ramekin info! It worked perfectly- the ramekins actually tasted better than the pie! I owe you!