The 2010 November Daring Bakers’ challenge was hosted by Simona of briciole. She chose to challenge Daring Bakers’ to make pasta frolla for a crostata. She used her own experience as a source, as well as information from Pellegrino Artusi’s Science in the Kitchen and the Art of Eating Well. 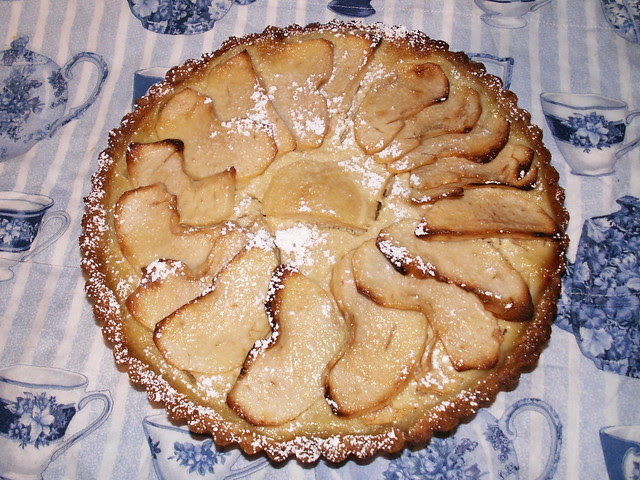 Earlier in the month I had some Mutsu apples from Justus Orchard in Hendersonville, NC. I'd been wanting to do something interesting, and along came the Daring Bakers Challenge. All it said was that I needed to make the crust recipe provided, in a tart mold, and then I could put pretty much anything I wanted to inside.

I kept finding recipes for Torta di Mele (Apple Tart in Italian!) but most of the recipes were in Italian too. Along the way I kept running across recipes for Alsatian Apple Tarts that looked more along the lines of a crostata type tart - thinly sliced fruit, custard, and a rich crust. I ended up making Dorie's version since I had that cookbook at home, but used the challenge version of the crust. 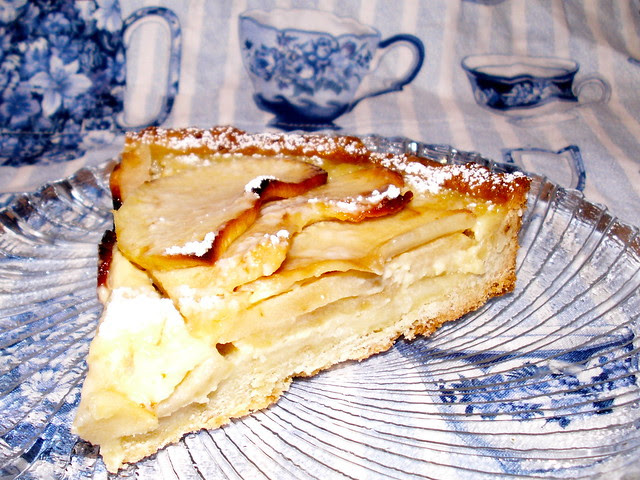 The recipe was a bit confusing, because I had way more apple than one layer's worth, and other pictures I'd seen of other versions seemed to have multiple layers. So against my instincts I added another layer. This meant the layer on top wasn't covered by the custard and had a much denser texture, and some of the edges browned, and it probably wasn't as picturesque as it could have been. Still, it tasted good!
at 11:40 PM

I love the apple filling for this crostata! It sounds delicious, especially combined with the pasta frolla crust. Great job on this challenge!

Even with multiple layers of apple it still looks delicious and I bet it was tasty well done with the challenge and your researches paid off I think. Great work on this challenge.

Cheers from Audax in Sydney Australia.

Apples and custard sounds great. Mutsu are actually my favorite kind of apples. They are quite versatile. I am glad the crostata tasted good.