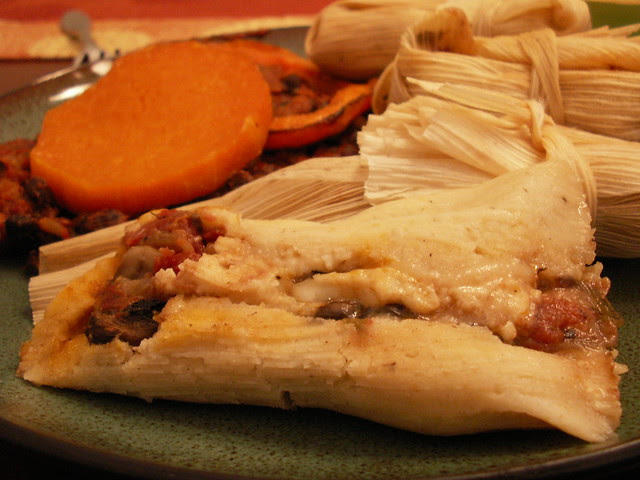 Since we don't eat meat, I tend to plan something different every year for Thanksgiving. Last year was Native American food, 2006 was mushroom crepes, 2008 was peanut butter and jelly since we were on the road to a cruise in Florida.

This year I had my heart set on Mexican food, but recipes I hadn't made before. It all started when I came across Post Punk Kitchen's recipe for Butternut Rancheros, which I could tell from her pictures would be fantastic (and was!). But that didn't seem elaborate enough, and I knew this was the time to tackle tamales. Thanks to the loan of a few Bayless cookbooks and some steaming baskets, I was ready to go! (I made the spicy mushroom tamales from Rick Bayless's Mexican Kitchen, and made the masa recipe from the bag.)

So what do you have for dessert with Mexican food? I had bookmarked a recipe for pumpkin pie flan, but I knew my in-laws were bringing a Deep-Dish Pumpkin Pecan Pie from Strossners. This baker couldn't NOT make a dessert on a holiday, however. 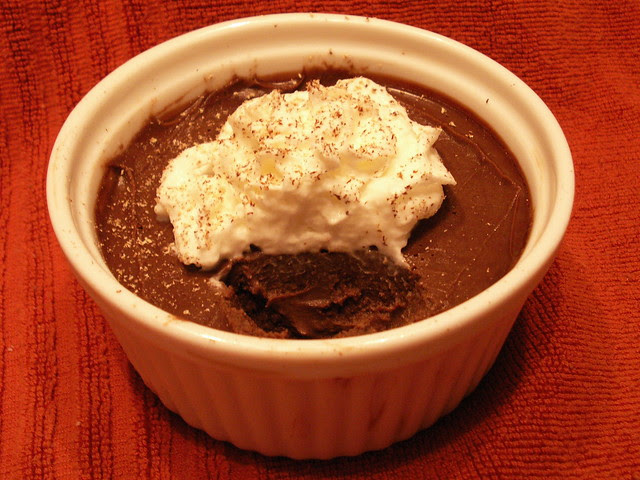 My alternate dessert was Mexican Chocolate Pots de Creme, a recipe from Stephanie Prida at FoodandWine.com. It was simple but so worth it! It takes the flavors of the chalky Mexican chocolate tablet and transforms it into a decadent, smooth dessert. I thought I had overcooked it, but after putting it through a sieve everything seemed just fine. 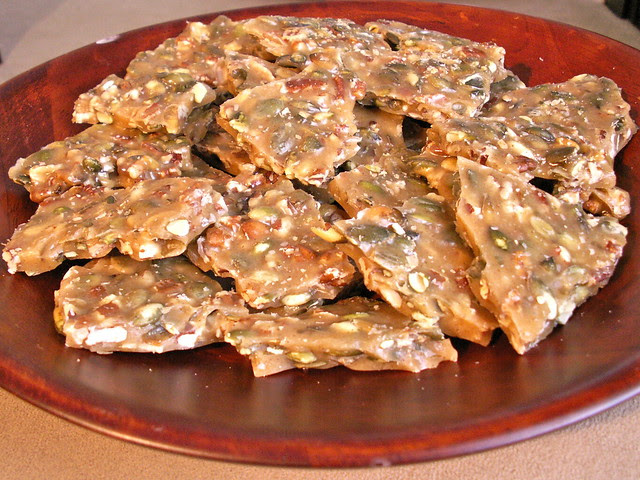 The other somewhat sweet recipe I made was Spicy Pumpkin Seed and Pecan Brittle, a recipe I picked up from SeriousEats.com. Although I figured out too late that I don't have an actual candy thermometer, merely a thermometer that goes up to 220, I guessed at the 300 and it turned out fine. This candy is an amazing combination of salty, sweet, spicy, and crunchy, and the flavors seemed perfect for this meal and for fall!
at 8:04 PM

They look AMAZING! Hope it was a good day :)