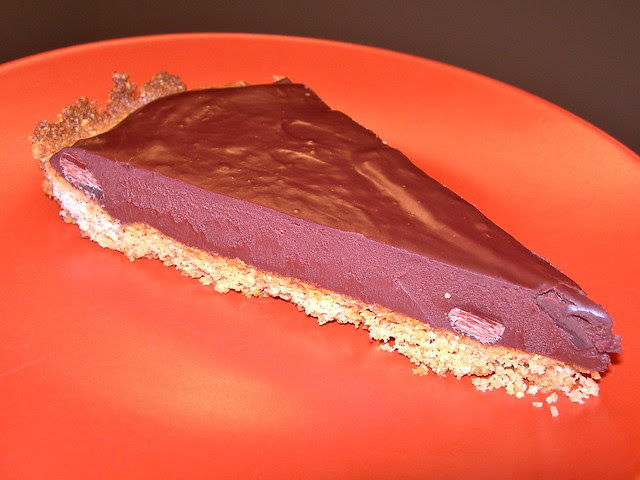 Happy Cinco de Mayo! My favorite story that came from the Cocoa Roastery Tour was the connection to Mexico in how the founder of Black Mountain Chocolate got started. I held this in my head for a week or so, knowing today was coming up, intending to combine all the traditional flavors of Mexican chocolate into a dessert.

After recent forays into gluten-free baking, I had some almond meal on my hands. I came across a recipe for a tart crust using it solely, no other flours, and adapted it for the dessert. I didn't find it to be as successful as I would have liked, but I will include it until I play around more. Maybe just a pâte brisée would have been better, but I wanted the crunch and flavor of the almonds without having them interfering with the texture of the chocolate.

So here is the recipe I made. It may need further tweaking. 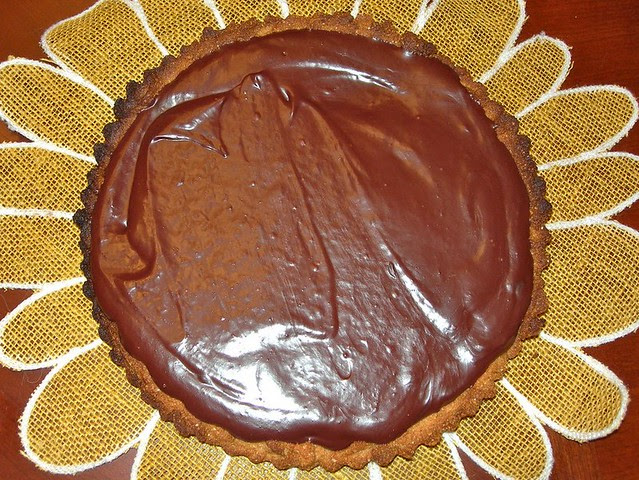 Mix ingredients with a fork and break up any large chunks of almond. Press into a tart pan with removable sides. Bake at 400 for 15-20 minutes, or until golden brown. Cool completely.

Heat cream in small saucepan over medium heat until steaming and a little bubbly, but do not allow to boil. Mix in spices and let the cinnamon stick steep for about 5 minutes.

Put the chocolate drops into a small mixing bowl. Pour the hot cream (through a strainer!) over them and let sit for 5 minutes, giving them time to melt gently. Stir together until smooth and pour into cooled crust. Ganache will set up in a few hours at room temperature or in 45 minutes or so in the fridge.

Slice into small wedges and serve with whipped cream if desired. (This is rich so small is a good idea).

I was looking for a dessert recipe to make for a Mexican Party!
This looks perfect!
Thank You for sharing!