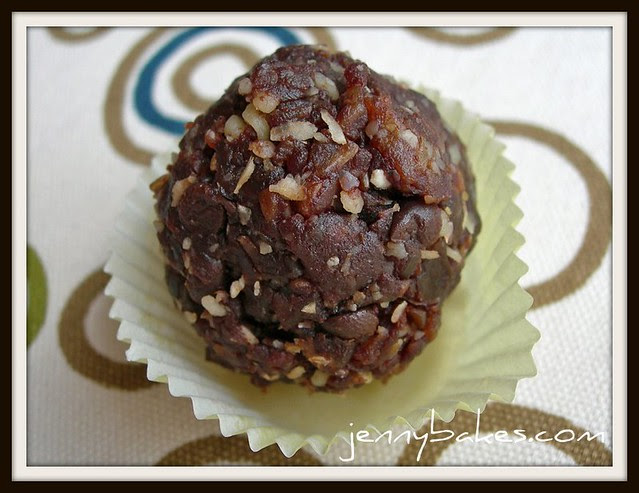 The recipe I kept looking at was for fudge babies (please click on her link for that recipe as well as her own variations), which she described as a homemade Larabar. I was looking for new things to eat for snack or breakfast that I could make ahead of time and wouldn't be bad for me, so I thought it couldn't hurt to give them a try.

I used walnuts, dates, a little handful of oats, a little vanilla, a pinch of salt, cocoa powder, and ended up adding a little agave since I was using drier dates than the brand she recommended. Then I formed the mixture into balls and stuck them in the fridge. I was surprised too. They don't taste overtly fruity like so many vegan things do, the lack of flour isn't a problem because you can taste the nuts in a good way. My addition of oats made every bite remind me of the double chocolate oatmeal cookies my Mom used to make, only these are much better for you, not to mention that I can only eat one at a time.

Gluten-free, vegan, and these could also easily be made raw with the omission (or different choosing) of 1-2 ingredients. But I just call them tasty.
at 7:48 PM

Oh my goodness, this made me laugh so much! In retrospect, maybe I should've picked a less "R-rated"-sounding blog title... but I had "Chocolatecoveredkatie" as my email address first when I was in middle school. Don't think I even knew there could be such a thing as naughty chocolate-covered goings-on!

Also, your oatmeal babies look gorgeous... and I love your idea of nutella babies!