Easy Candy for the Holidays 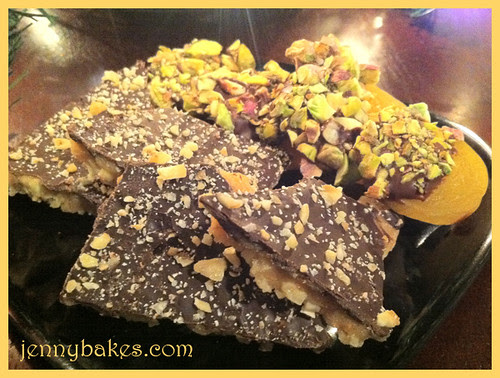 After telling my caramel making woes to enough people, I was told a secret - the Secret of Microwave Toffee.  I had no idea you could make toffee in the microwave, and approached the idea with great skepticism.  I finally had time to try it tonight, and it is a must-make for the holidays.  Super easy, and super delicious.  (Thanks, Jane!)  I am going to make a few more batches with different nut combinations.  I used the recipe from Lesley at Kitchengifts.com, but almost all the recipes I found on the internet were variations of the same formula.  I had chopped hazelnuts left over from the big batch we roasted a few weeks ago, so I used those instead of pecans this time around.

The other candy displayed on the plate is so simple to make you don't even need a recipe, you just need good ingredients. We had picked up a few of the single-origin bars from Black Mountain Chocolate when they were at the Asheville Tailgate Market.  I melted the Peruvian bar in a double boiler, dipped dried apricots in it, and rolled them in chopped pistachios.  They have the marvelous combination of sweet/salty/bitter and haven't lasted as long as they should have in our house!
at 11:10 PM