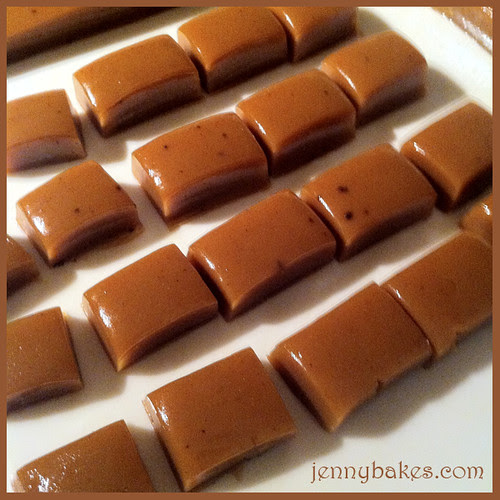 Well, hello, caramel, my old nemesis.  You may have defeated me multiple times in the past, from caramel cake to destroying my oven to failed attempts at caramelized sugar,  but  as I planned my holiday baking, I came across this recipe for gingerbread caramels.  I wanted them.  I wanted to bring them to a cookie exchange and feel like I had something to offer.  I pledged I would not be defeated.

I bought the ingredients over Thanksgiving break, and it took me two weeks to get up the nerve to try the recipe.  Once it is poured into the pan, it has to sit untouched for 24 hours, so it has to be timed right.  I whipped it up Saturday evening so I could wrap the caramels Sunday evening.  Assuming the recipe worked.  Assuming I didn't just throw away 2 pints of heavy cream and 2 cups of corn syrup and 4 cups of sugar in the process.

After the fudge I made for my students ended up overcooked and dry, I treated my candy thermometer with great skepticism.  I went with instinct over the number on the gauge, and the minute the boiling mixture changed to a somewhat stretchy bubbling texture, I pulled it off the heat.  This was about 8 degrees less than what Martha told me to look for, but I think I did it at just the right time.  I was supposed to mix in the vanilla and spices before pouring the mixture into the pan, and I did, but it didn't mix in very well.  In the end, they aren't clumping up enough to make a dusty taste, so I let it go. 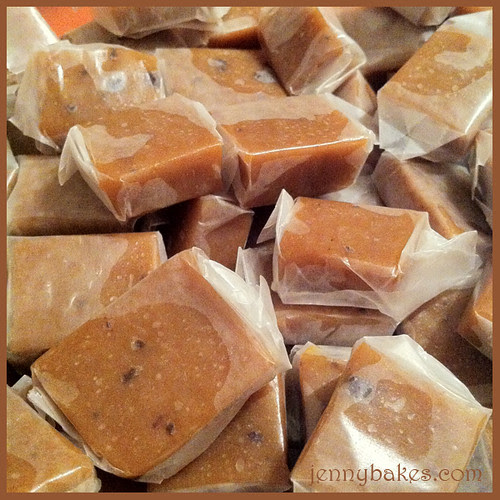 After 24 hours came the wrapping.  And the wrapping.  This recipe makes a ton, but it should be enough to bring some to the cookie exchange and give some as gifts.  I'll be making this recipe again.  I won't be afraid.  You should try it too!
at 11:13 PM

But what does it taste like? It looks gluten free to me!