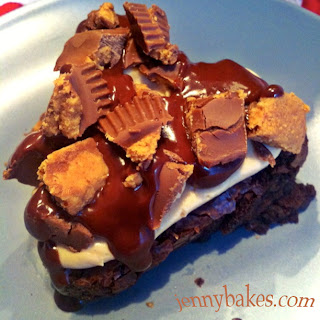 On June 24th, we celebrated our thirteenth wedding anniversary!  I know that the traditional gift for 13 years is textiles, but who would pick fabric over peanut butter mousse?

I hadn't really decided what to make so I just scrolled through recipes I'd always meant to try until I came across a picture by Culinary Concoctions by Peabody for her Peanut Butter Cup Brownie Torte.  Honestly, if there is something more decadent on the earth, I do not know of it.

I made a modified, slightly cheater version.  First, I never feel like homemade brownies are anywhere close to box brownies.  I've tried recipes that claim to be close to that chewy texture, but NO.  So I always grab the Ghiradelli double chocolate type when I need brownies, although this time I went with triple chocolate because I wanted super moist chewy.  They were perfect.

The plate you see pictured above? I could only eat half of one brownie heart torte thing.  We fell asleep on the couch in decadent coma.  We're old and married, and it was worth it!
at 11:07 PM