I signed up with the Tuesdays with Dorie group in order to keep challenging myself as a baker despite not eating many baked goods anymore.  This group started out by baking through Baking: My Home to Yours by Dorie Greenspan (a favorite in my house!) and moved on to Baking with Julia, based on the series with Julia Child.  This is another favorite cookbook in my house, so I was excited to join.

It is just now that I'm baking something along with the group!  Hopefully they still want me, and hopefully I will sink into their twice a month baking schedule.  Now on to the recipe! 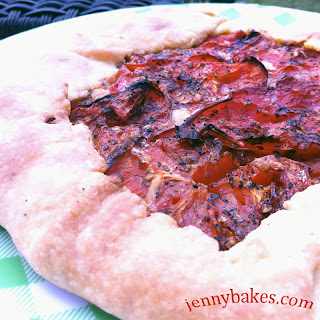 For June 18, the recipe selected is the Cheese and Tomato Galette from page 429 of Baking with Julia

Basically, the recipe asks you to make the galette crust ahead of time, and the same recipe is used for sweet and savory galettes in the cookbook.  I had never made a crust that mixed ice water and sour cream, and the only sour cream I had at home was 'light,' but I just went for it.  The other key ingredients besides the obvious flour and salt are cornmeal and butter.

There had been some chatter in the group discussion on how roasting the tomatoes made for a less watery galette.  I had two tomatoes in the fridge, and used the Barefoot Contessa's roasted tomato recipe as my framework.  I sprinkled the tomatoes with dried basil since I had neglected to buy any fresh.

When I assembled the galette for baking, I used mozzarella and provolone that I topped with the tomatoes.  I baked it a little less than directed because I could smell it was ready, and when I took it out the crust was already a little more browned than I would have liked.  That's a pure butter crust for you! 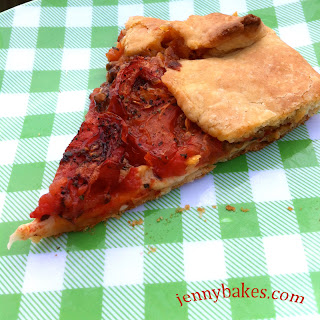 Other than the time you have to allow for the crust to chill, this is a quick and easy recipe.  I had made sweet galettes before (see my Blueberry and Blackberry Galette with Cornmeal Crust) but never a savory version, so I enjoyed making this recipe!  Now I have another crust to use, will it go for something sweet or savory?  Spoiler - I have peaches in my fridge, so I think I know.  Maybe I'll combine the two and do peach-rosemary or something.  I'll report back.

Now for the real question - is the "g" in galette hard or soft?

Your galette looks wonderful. And I can so imagine a galette with peaches. :)

Looks delicious! I have only recently joined BWJ but it has been a lot of fun! Look forward to seeing your recipes.

Ah! Glad your comments are now working as I have tried a couple times today. Glad you are posting along with the group!

Sorry Catherine! I had to turn on the word check thing after getting so much spam. Thanks for coming by!

Looks good. I must of missed the roasted tomatoes idea. It looks like it worked well.

I think that the roasted tomatoes would have added a terrific depth of flavour. I was too lazy to do that, but your galette looks great.

PS...we have a Berry Galette coming up for FFwD

I wish I thought of roasting my tomatoes. I think that would have been a better combination. Yours looks fabulous

Roasted tomatoes would be awesome for this dish. I love everything Ina!

It looks great! The bread and savory recipes in this book have been really good.

I'm pretty sure galette has a hard g.

Welcome to the group!!! Your galette (no idea how to say it) looks great. I missed the roasted ideas but will keep them in mind for the next round.

Hello, Jenny- your galette looks scrumptious & I really like your blog. I noticed that you reside in Greenville, SC- I grew up in North Augusta, SC- about an hour away. Although I married a Texan & have lived there for 35 years- I still miss SC! Keep on baking & have fun.