This is a lot like what happens if you made a muffin batter but didn't want to take the time to make muffins. But hey, we all have mornings like that. And this is a pretty healthful recipe that can be adapted to almost any fruit combination. The original used blackberries, I used blueberries, just make it what you can! 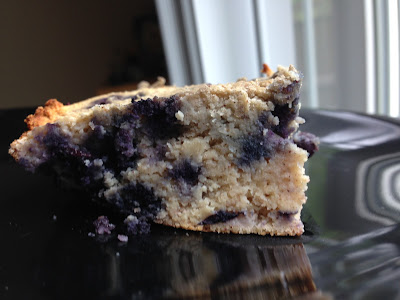 Paleo Blueberry Bars
(adapted from What Runs Lori)
Preheat oven to 350 degrees. Grease an 8×8 baking pan and set aside.

In a large bowl, mix together the coconut flour, shredded coconut, cinnamon, baking powder and soda, and salt. Add in the coconut sugar, mixing again.

In the same bowl, add in the bananas, eggs, melted coconut oil, vanilla extract, and almond milk. Mix until all ingredients are incorporated.

Fold in the berries and spoon the batter into the greased pan. Bake for 40 minutes or until the sides are golden.

Remove from oven and cool. Cut into about 16 squares.