A few weeks ago, I made quark for a German recipe. I needed to do something with the leftovers so I found a recipe for quark pancakes. I would imagine, lacking quark, you could use ricotta. These are light and fluffy, and highly recommended. The blogger that provided the original recipe served them with peaches and thyme, which would be even better. I just ate them with butter and syrup. 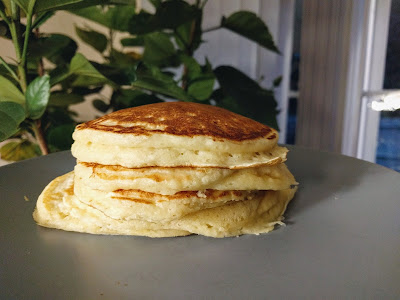 Quark Pancakes
(Recipe by Sarah Coates on The Sugar Hit)

* - I did not separate the eggs nor did I whisk anything separately. As you can see from my photo, they are still the fluffiest. You might like them even more with these steps but I just dumped and mixed and cooked.