I often get access to advanced reader copies of cookbooks through Edelweiss, and usually flip through and note a few recipes to try. This is a recipe I could not get out of my head! So while I need to give a disclaimer and say that I was given a digital copy of this cookbook, the desire to make this pie is all my own. Lomelino's Pies: A Sweet Celebration of Pies, Galettes, and Tarts, comes out October 24.

This is a crowdstopper pie, a centerpiece pie, and it does take a little bit of extra effort, a little more than a typical two-crust pie would take. But I made it inside an afternoon, so it's absolutely doable. 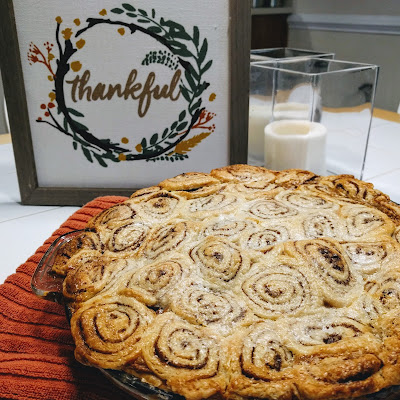 What a genius idea is this, to use pie crust like cinnamon roll and make that into a crust? It is a stunning visual and I couldn't wait to try it, but I've been biding my time until I had local apples (Mutsu from Granddad's, just like last week) and time to make it. 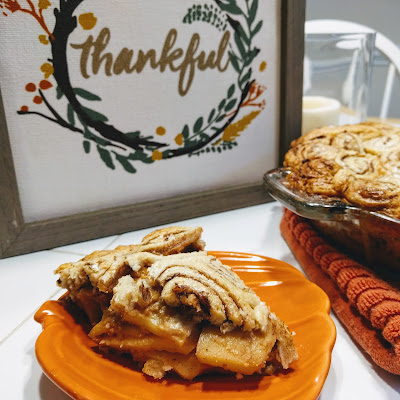 The apples are mixed with dulce de leche, orange juice, and a few spices, so it isn't quite the typical apple pie inside. Rolling Out the Crust and Baking the Pie***
Jenny's Notes: 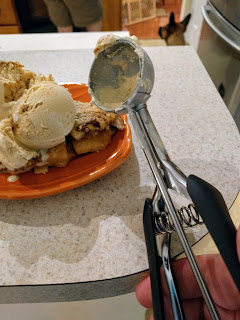 * - I found this article from King Arthur Flour on converting apples between pounds and cups  incredibly helpful! So I sliced up the equivalent of 8 cups of apples, which was 3 huge Mutsu apples.
** - Not gonna lie, I skipped this entire section and just brushed the pie with some heavy cream and sprinkled with granulated sugar, lacking any fancy sugars.
*** - I'm not sure the crust filling shouldn't have a little sugar in it, but it really does bake well on both top and bottom in the time allotted, should that be a concern. I had to steal some slices from the second log to adequately cover the bottom and sides, but still ended up with enough for the top. I think I should have made the top crust and frozen it before attempting to apply it because although it flipped onto the pie from the parchment, the paper was still hard to get off and pulled up several of the roll pieces. I didn't do the overhang, just pressed the top into the bottom and it worked out okay.
In general I'd recommend baking the pie on a cookie sheet since there is a lot of sugar in there.
**** - I offered my eaters vanilla and dulce de leche, and both flavors of ice cream worked well. Pictured is the dulce de leche.

Disclaimers and credits galore: While this is not a post affiliated with the ABRAMS Dinner Party, the ice cream scoop pictured was sent as part of their commercial partners. Many thanks to OXO!

And as always, the publisher of Lomelino's Pies (Roost Books) provided access to the cookbook in exchange for an honest review.
at 5:21 PM

That is the awesomest-looking crust I think I've ever seen! Well done! Definitely going to bookmark this and give this a whirl over the holidays! Thanks!