When I first perused First We Eat, one of the cookbooks sent to me as part of the ABRAMS Dinner Party, I was enamored by its northwestern focus, as a former resident of the northwest. I also loved the seasonal sections, and had my eye on some of the rhubarb recipes in particular. When rhubarb proved hard to find, I dug my heels in until I could find some. One (new, I presume) worker at a local organic store told me that rhubarb season is August, but anyone who knows looks for it between April and June. Finally the produce guy at Publix, wearing a light pink shirt, said he had a big box in the back, and stopped what he was doing to package some up just for me, including washing and chopping it. This is not a paid advertisement for Publix, but seriously, does any grocery store even come close to their service level?

I marked several rhubarb recipes, but the one that moved to the forefront is this recipe for rhubarb-tarragon ice cream. I couldn't imagine the flavor combination. It took almost a week longer to make all the parts and to allow time for everything to chill properly, but I did it! 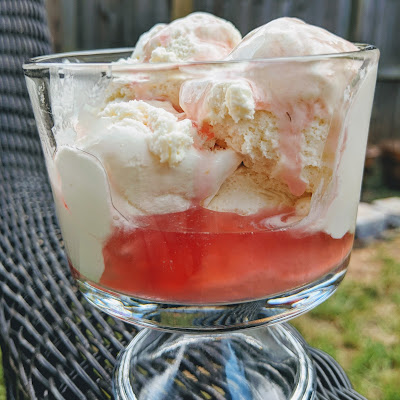 In a very small saucepan, stir together the condensed milk and tarragon. Heat over low heat until hot but not boiling, stirring every minute. Remove from the heat and allow to rest at room temperature for 1 hour. Strain the infused condensed milk into a bowl, discarding the tarragon.

In a medium saucepan, combine the rhubarb, sugar, star anise, and 1/2 cup (120 ml) water and bring to a boil over medium-high heat. Reduce the heat to low and simmer, stirring every 5 minutes, until the rhubarb has become pulpy and partially disintegrated, 20-025 minutes. Remove from the heat and allow to cool to room temperature. Strain the syrup through a mesh sieve into a bowl and discard the solids. You can double the syrup recipe, and serve half alongside of the ice cream for garnish. The syrup can be stored in an airtight container in the refrigerator for up to 1 month.

In a medium bowl, whisk together the egg yolks and the rhubarb syrup until the mixture lightens in color, 3-5 minutes.

Bring water in the bottom of a double boiler to a boil over medium heat. Reduce the heat to low. In the top of the double boiler, whisk together the infused condensed milk and the egg yolk mixture. Whisk until the mixture thickens enough to coat the back of a spoon, 10 to 12 minutes. Remove from the heat and allow to cool to room temperature. Cover and refrigerate for at least 4 hours or overnight.

In the bowl of a stand mixer fitted with the whisk attachment, beat the cream on medium-high speed until it holds soft peaks. Cover and refrigerate.

Fold the whipped cream into the chilled egg yolk mixture, then pour the mixture into an ice cream machine and churn according to the manufacturer's directions. Transfer the ice cream to an airtight freezer-safe container. Cover and freeze. Best if eaten within 6 months.

I did make the double recipe of the syrup, as you can see in the photo. What a pretty pink color! I also have been adding some to sparkling water for a fizzy spring drink, since I didn't end up using all that much when serving the ice cream.

If I know anything, it's that you have to really chill everything, so I did overnight for all of it.

First We Eat: Good Food for Simple Gatherings from my Pacific Northwest Kitchen, is by Evan Kosmas Flores, and came out March 20, 2018.

I also made the Fennel-Pistachio Pesto Lasagna, since it also had the tarragon and I had enough for both recipes. If you can't picture this flavor combination, well neither could I. It was amazing. Fresh and tasting of spring, and if I had not known what was in it I'm not certain I could have identified the flavors individually but they really did work nicely together. I'll post a picture of that at the end of this post.

I have my eye on the Brown Butter Sprouted Grain cake that is made here with a rhubarb buttercream, but probably has endless flavor possibilities. I even went as far as purchasing the sprouted grain flour but have not made it yet. I also plan to make the Chai and Poppy Challah (but it seemed better for the fall), the Homemade Chai Latte, and perhaps I'll bring the recipe for Foraged Fir Tip Herbal Tea with me to Alaska.


This post is sponsored by ABRAMS Books, as part of the ABRAMS Dinner Party.
at 12:00 AM