As we planned the annual book club pick party for my in-person book club, I started thinking about which dessert I would make. When I RSVP'd, our fearless leader emailed me back:


So, what extraordinary thing are you bringing on Monday?  Please make another Pavlova!  My bday is this Friday and I would love to have a piece on Monday!!

How could I ignore a birthday request? I had marked a recipe in The Foreign Cinema Cookbook: Recipes and Stories Under the Stars by Gayle Pirie and John Clark for a pavlova that used spring fruits, so once I checked that she was okay with rhubarb, I knew I'd make this recipe.

The recipe in the cookbook ends up making 6 individual-sized pavlovas, but I wanted to make one giant one, not being able to predict how many people would be there, but knowing it would be more than six. So I found a recipe with what looked like a scaled up recipe with the same ratios, just to make sure it would work, with one stabilizing ingredient (I'll link to it; the recipe that I'm including is from the cookbook itself.) I used the fruit methods from the cookbook recipe exactly, except I didn't have time to go find rosewater and left that out. I think this is how cookbooks are used, though, where you start with the recipe and adapt to make it work for your available ingredients and who you are making it for. 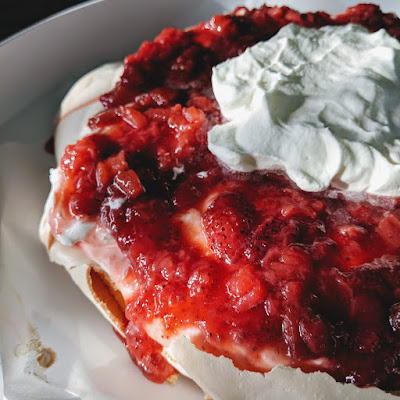 To make the meringue: Position a rack in the center of the oven and preheat the oven to 200 F (90 C). Line a rimmed baking sheet with parchment paper.

Fill a medium saucepan with enough water to reach about one-third of the way up and bring it to a boil over high heat. Lower the heat so that the water is just barely simmering.

In a medium heatproof bowl large enough to rest on the edge of the pan of simmering water without touching the water, whisk the egg whites, sugar, and salt. Slit open the vanilla bean lengthwise and scrape the seeds into the bowl. Drop in the pod as well.

Set the bowl over the pot and gently whisk the egg white mixture until the sugar completely dissolves and the mixture is hot (a thermometer should read 150 F/ 66 C). The liquid will look clear with a little bit of foam on top.

Remove the bowl from the pan and transfer the egg white mixture to a clean bowl. Discard the vanilla pod. Beat the mixture with a handheld electric mixer on medium-high speed until it doubles in volume and stiff peaks form, 7-8 minutes. You should see no unincorporated liquid in the bottom of the bowl.

Use a 3/4 cup (60-ml) measure to dollop the meringue onto the prepared baking sheet in 6 mounds with 2 inches (5 cm) all around them. Use the back of a spoon to make a well in the center of each.

Bake until the meringues are dry on the outside and soft in the center, about 90 minutes. Transfer the pan to a wire rack to cool completely, at least 30 minutes.

To make the coulis: Hull and roughly chop the strawberries and put them in a medium saucepan. Add the sugar, lemon juice, salt, and 1/4 cup (60 ml) water. Cook over low heat, stirring occasionally with a wooden spoon, until the strawberries are soft and the liquid is syrupy, about 10 minutes.

Let cool slightly, then transfer the strawberries and syrup to a food processor fitted with a metal blade and process until smooth. Strain the berries through a fine-mesh strainer (discard the solids) and let cool completely.

To prepare the rhubarb: Line a plate with paper towels. In a medium saucepan, combine the sugar, rosewater, salt, and 4 cups (960 ml) water. Cook over low heat, stirring occasionally, until the sugar dissolves and the syrup comes to a simmer, about 5 minutes. Add the rhubarb and return to a simmer until it is just barely tender, about 30 seconds. Remove from the heat. Pour the mixture through a fine mesh strainer; discard the liquid. Scatter the rhubarb onto the lined plate to cool.

Pour 1/4 cup (60 ml) of the strawberry coulis into 6 shallow individual serving bowls and set a meringue on top of each. Center a heaping spoonful of rhubarb over each of the meringues, letting it cascade over the sides. Dollop each pavlova with whipped cream and serve immediately.

Make ahead: Although this dessert has several components, all can be made in advance and assembled to order. Refrigerate the strawberry coulis and rhubarb in separate airtight containers up to 1 day ahead. Store the baked meringue in an airtight container at room temperature for up to 5 days.

Notes from JennyBakes: I substituted this classic pavlova recipe, which has a lovely marshmallow texture on the inside if prepared correctly. I made the whipped cream, rhubarb, and coulis the night before, then made the pavlova the morning of book club, allowing it to cool in the oven while I was at work. This worked okay but it did get quite a bit wider and flatter than it started, so I may not have beat the whites long enough! It still tasted good, still soft inside, and heck, it made it easier to share. 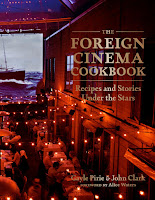 This cookbook is brand new, and came out last week on May 15, 2018. Since I wasn't familiar with the restaurant, I started out expecting recipes that matched with movies somehow. But apparently this is a well-loved San Francisco restaurant that has been around since 1999. Woe is me, for I live too far from the west coast. You can read more about the restaurant at its website.

Until I had a reason to make the pavlova, I had my eye on a bunch of recipes that I am likely still to try (including some delicious sounding drink recipes based on homemade ingredients) - Potted Smoked Trout, Tomato Salad with Harissa Vinaigrette, Farro and Grilled Kale, Buttermilk Spoon Bread with Shiitakes/Corn/Scallions, Wild Greens Soft Polenta, Ginger Cake with Cardamom Creme Chantilly, and Champagne Omelet from the brunch section.


This post is sponsored by ABRAMS Books, as part of the ABRAMS Dinner Party.