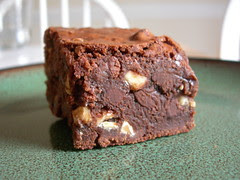 So Good Brownies
Originally uploaded by watchjennybake.
When I stumble across a recipe in a magazine that claims to be the best version of something, I'll admit to curiosity as to whether their claims are true. The August 2009 issue of Southern Living Magazine featured this brownie recipe as being the "best," so I gave it a try.

So Good Brownies
Makes: 16 servings
An Adaptation of a recipe from Baker's Chocolate

1. Preheat the oven to 350 F. Line bottom and sides of an 8-inch pan with aluminum foil, allowing 2-3 inches to extend over sides; lightly grease foil.

2. Microwave chocolate squares and butter in a large microwave-safe bowl at HIGH 1 1/2 to 2 minutes or until melted and smooth, stirring at 30-second intervals. Whisk in granulated and brown sugars. Add eggs, 1 at a time, whisking just until blended after each addition. Whisk in flour, vanilla, and salt.

4. Bake at 350 for 40-44 minutes or until a wooden pick inserted in center comes out with a few moist crumbs. Cool completely on a wire rack (about 1 hour). Lift brownies from pan, using foil sides as handles. Gently remove foil, and cut brownies into 16 squares.

The magazine had a bunch of stir-in and dress-up ideas for the brownies, but I just dumped in a cup of white chocolate chips and a cup of regular chocolate chips, because I had them on hand. I had to bake them for maybe 15 minutes more because the middle wasn't setting, which made the edge ones a little hard. Mine were also considerably thicker than the picture they provide.

So were these the best? Not in my opinion. There was too much sugar, so much that they tasted almost grainy with it. The chocolate was a nice flavor, but there wasn't really a lot of depth to it. My winners probably still include Alton Brown's Cocoa Brownies for cakey ones and maybe Fat Witch brownies for fudgy ones (of course I'm still on the hunt for the elusive fudgy vegan brownie too).

Haven't tried Alton's or the other you mentioned, but I think the best brownies I've ever had are DebbieLee's. You should try her recipe...

These are beautiful brownies also. You have great photos. I want to check out your cooking blog. I am glad to have found you.