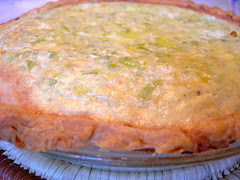 Close up - cute leeks!
Originally uploaded by watchjennybake.
I find myself still on a kick of trying recipes from Mastering the Art of French Cooking, vol. 1 by Julia Child. Yes the movie is coming out, but I have also gone back to read the original blog by Julie Powell from 2002-2003, The Julie/Julia Project. While the book is a story of her personal journey while she happened to be cooking through Mastering the Art of French Cooking, the blog has a lot more about the recipes she tried - whether they worked, how they tasted, what she learned. As I read, I mark recipes to try!

Of all the quiches, I chose leek because that seems very French, and Julia Child really does love to use leeks in everything. While searching around the web, I came across the entry on the same recipe in Smitten Kitchen, where she marvels at how you think you know how to cook something well, and Julia Child will give you a strange technique that tastes better than anything you've ever had. I think the leek preparation in this recipe is one of those instances. 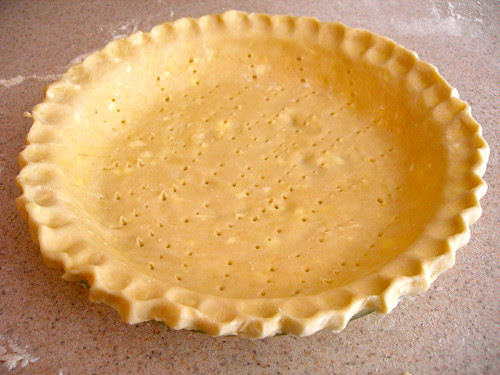 To me, however, the true star of this recipe isn't the quiche but the crust. It is a pâte brisée, known by many names - short paste, short crust, pastry dough, pie crust. Before I swore up and down by my Grandmother's recipe (with the vinegar that stops the crust from developing too much gluten), but I may have had a conversion experience. I'm not sure if it is the ration of butter to shortening, the salt that adds the correct amount of flavor, or the fraisage technique used before the chilling of the dough that makes the end texture so nice, but it really works - flaky, flavorful, and easy to work with. Fraisage is the step where you take the dough that has barely come together and smear it across the counter, small bit by small bit, which mixes the flour and fat a different way.

My only beef with this recipe is that Julia never says how much it makes. How many crusts, Julia? I decided it was way too much for one, and wish I'd cut it in half to begin with so as not to have so much weight on the outsides of the shell that I cut off. 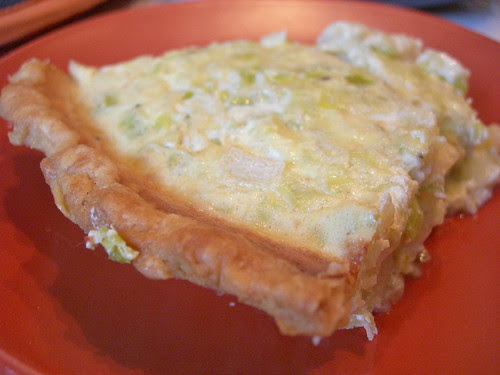 One last confession before I go. I've been making quite a few Julia Child recipes in the last two weeks, and they are all very butter-centric and full-fat. I just couldn't bring myself to use 1 1/2 cups of whipping cream in one quiche that serves 4-6 (according to the cookbook; we cut it into 8 pieces). So I did substitute fat free half and half for the cream, which sets up just fine. The crust alone contains 12 tbsp butter and 4 tbsp shortening, so this isn't exactly a fat free dish!

Since I had about a half recipe of the pâte brisée left, I decided to use the opportunity to use up a few things in the fridge, and a key lime buttermilk tart is downstairs cooling as we speak. Technically I should have made a sweet crust for it, but I don't expect it to be too bad.

I adore flamiche aux poireaux... used to grab individual-sized portions for lunch from the boulangerie-patisserie when I lived in France. I have yet to try the "smearing" technique for crust, sounds interesting! Yet another reason I need that book.

I have to ask, what the heck is in "fat free" half and half? Sounds kind of scary... I always suspect that when they take the fat out of fat-free foods, they replace it with chemicals or something weird...

I'm all about the crust too! Yours looks perfect!

It looks lovely. Maybe you can share you grandma's tart baking tips elaborately... i pretty bad with tart and need some tips. I just loved the way the shell looks :-)

I just read *today* that her book is back on the bestseller list... forty-eight years later. Go St. Julia.