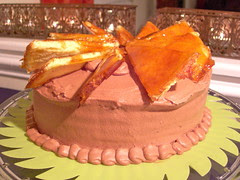 Dobos Torta
Originally uploaded by watchjennybake.
The August 2009 Daring Bakers' challenge was hosted by Angela of A Spoonful of Sugar and Lorraine of Not Quite Nigella. They chose the spectacular Dobos Torte based on a recipe from Rick Rodgers' cookbook Kaffeehaus: Exquisite Desserts from the Classic Caffés of Vienna, Budapest, and Prague.

In usual Daring Baker fashion, or maybe usual JennyBakes fashion, I put this off until the day before the challenge needed to be posted. It was the first day of classes at the university where I work, and since I run the music library, I couldn't be sure I'd even have time at home! I set aside two hours and was able to finish most of it during that time, although the buttercream was too soft to put the cake together until 11 pm or so. Then my brain woke me up at 5 this morning demanding that I take pictures and blog about it before I went to work. So here I am, a bleary-eyed baker, wishing I realized I didn't have any hazelnuts before the wee hours of the morning. This cake would have looked nice with nuts under each caramel wedge, and sprinkled around the outside, wouldn't it? Ah, well, next time.

The Dobos Torta is a five-layer sponge cake, filled with a rich chocolate buttercream and topped with thin wedges of caramel. (You may come across recipes which have anywhere between six and 12 layers of cake; there are numerous family variations!) It was invented in 1885 by József C. Dobos, a Hungarian baker, and it rapidly became famous throughout Europe for both its extraordinary taste and its keeping properties. The recipe was a secret until Dobos retired in 1906 and gave the recipe to the Budapest Confectioners' and Gingerbread Makers' Chamber of Industry, providing that every member of the chamber can use it freely.

Dobos is pronounced with an "sh" sound at the end, because that is how you say the Hungarian "s." I might be delirious, but I have been giggling and saying Daring Bakersh Challenge Augusht 2009.... you get the picture. Thanks to my co-worker who is from Hungary and could tell me how to pronounce it! He will receive a slice of torta this morning.

You might notice that this recipe involves caramel, and anyone following me for a while knows that caramel is my nemesis. It went pretty well this time. It took the sugar/lemon juice/water mixture a long time to get to the beautiful amber color, and I only burned two of my fingers while I spread it over my cake wedges, so I consider it a caramel success. Take that, nemesis. I am not sure its worth much to eat - I found it super lemony in a bad way.

So without that special wedge of caramel on the top, you are left with a cake of thin sponge cake with chocolate buttercream. It tasted good, and in the end that's really all anyone cares about! You can see many other versions of the dobos torta by heading to the The Daring Kitchen.

This looks awesome! I didn't do DB this month cause I am on vacation but look forward to trying the recipe. Fantashtic job! :)

Jenny this looks really spectacular. nice job on this.

Gorgeous!! somehow, I can see Sean Connery saying "Augusht" instead of your colleague...

Sorry about the burned fingers. Great job on the cake!

i am trying to reform from being a last minute DB, but I know how that is. Looks great.

Lorraine @ Not Quite Nigella said...

Your Dobosh (hehe) looks amazing! And how lovely of you to give a slice of it to your Hungarian colleague :)

You made such a creamy looking torte. Beautiful buttercream indeed. Congrats!

Beautiful cake! I hope that it tasted at least as good as it looks!

Well, your Dobosh looks delish- I also waited until the day before to complete this challenge. The important thing is that we did it- and some of us just work better under pressure too! Nice results.

Thanks for the correct pronounciation lesson--so cute! You did a great job with your dobos! :)

I've been saying it wrong this whole time!! HA.

Hehe - wonderful Daring Bakersh Challenge :) Kudos on squeezing it in!

Beautiful! You did a great job!

i also waited until the last minute--your caramel wedges look a lot better than mine! great job!

Great job! And thanks for the info on how to pronounce dobos!

I'm right there with you on the caramel tasting too lemony. But the cake still looks beautiful!

Wow, I also made mine at the last minute...your dobos torte looks delicious!

It looks great without the hazelnuts. I can undershtand the gigglesh.

Last-minute or not, your torta looks amazing =D. Wonderul job!!

I think this is the first post I've read where someone had no difficulty with the caramel cake wedges, nor had any problem with the lemon juice in the caramel! Kudos!

I still have a dak circle on my right hand due to making caramel. So I can totally relate to you on that one. Great looking torte, hopefully it can cheer u up a bit

Waiting until the last minute sure didn't affect the outcome...it looks great!!! I am also a procrastinator:)

Great job on this cake Jenny. It looks really good.

Hi! I have been following your blog for a few months now, and I have learned many things from reading your blog. As a token of appreciation, I have listed your blog as “One Lovely Blog”. When it is convenient, you can check it out here: http://singinghorse.vox.com. Thank you for everything!