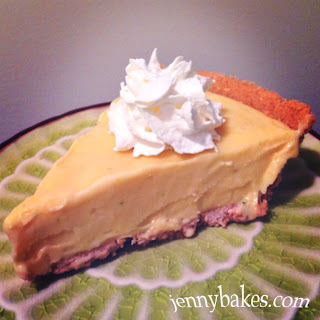 
Ingredients
6 large egg yolks
¾ cup key lime juice (I used bottled)
2 Tbsp lime zest (I used a regular lime)
2 14-oz cans sweetened condensed milk
9”-10” graham cracker crust
A few slices of lime for garnish
Whipped Cream
This isn't my favorite key lime pie ever; I tend to prefer the custardy baked kinds.  But this was about using Nora's actual recipe!  I brought it to a meeting and by the time the meeting was over, the pie had melted and morphed into a less appetizing cold key lime pudding.  Definitely make this when you can control when and how it is served!  With the key lime juice, it was very tart and refreshing.
at 11:23 PM