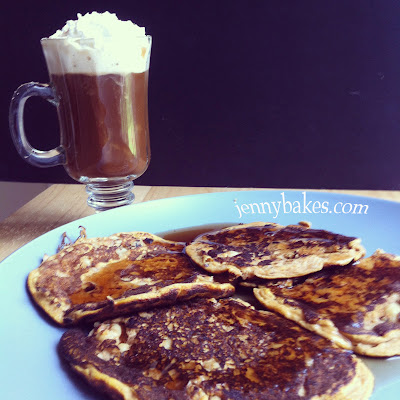 I think I post about pancakes a lot more often since we started eating low-sugar most of the time.  Hey, they're a lot easier to make without bready flour and gluten!

This past weekend, it started to feel like fall.  Or maybe I was just really ready for fall.  It is never too early for pumpkin, anyway, and I had hoarded a can of pumpkin in the back of the pantry for when this craving was bound to hit.

The coffee has the pumpkin syrup recipe I blogged about last November, so check that out.

The pancakes recipe is a mild tweak of a paleo recipe that I found in Pinterest.  It comes from the Cupcakes to Crossfit blog, which has some great stuff on it so check it out.  I'll just post my version and not her original.  If you're not low-sugar and don't mind things like maple syrup, that would probably taste even better with pumpkin.  It relies on coconut flour, which I am growing to really like in pancakes when used correctly.  I added walnuts because I had them and they sounded tasty.