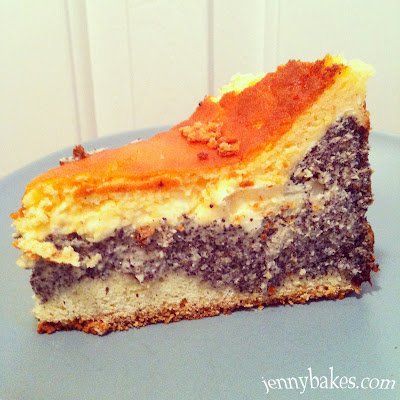 This summer, I read Infinite Jest by David Foster Wallace, only I didn't read it alone, I read it along with an international reading group.  As we chatted about the book we talked about other things, and one reader in Germany found out I had a baking blog.  She wanted to know why Americans hardly ever use poppy seeds, since some of her favorite recipes have tons of them.  I'm not really sure why we don't, and one of my mother's standards was a lemon poppy seed cake, but it didn't have poppy seeds in it the way mohnkuchen does.

Fast forward to Angelika sending me a recipe for mohnkuchen.  She made an initial attempt to convert the recipe to English words and ingredients, but we still had to puzzle through items like "custard powder" and "curd."  I also had to find a place to buy "ground poppy seeds" online.  In the end, they don't look all that different to me from regular poppy seeds, but maybe I am missing something.

Mohnkuchen translates directly to "poppy seed cake."  There are many versions out there, some that have a streusel topping, some that just have the poppyseed layer on top of a thin crust, some with poppy seeds throughout a pound cake.  This version has a shortbread crust, a paste layer of eggs, poppy seeds, almond flour, and semolina, and a cheesecake-custard layer.

I feel like I made a lot of mistakes on this baking experiment, and I'm not going to post the recipe until I've had a chance to try it again.  That should help me figure out if it is user error or recipe error, or even ingredient error.  I used Bird's Custard Powder for the custard powder, and cream cheese for the curd.  I didn't let the middle layer cool completely.  Something in there made the middle take forever to set, and that burned the bottom of the crust.  It did set up overnight in the fridge, but was still clearly not quite right on the top layer.  I also should have rolled out the crust and just pressed it into the pan, and you can see it isn't quite right.  I still ended up bringing it to work and it was eaten.  I think next time I will take more time to let the poppy seed layer cool, but also I might try it in a larger pan where the layers will be a bit thinner.  I will also not wimp out on the crust rolling.  And I will mix the butter and cream cheese layer together before adding the eggs for the top layer.

Have any of you ever made mohnkuchen?
at 3:52 PM

I just checked my original german recipe with the translation I sent you if I mucked something up, but I have to disappoint you: it wasn't me. I blame it on the different ingredients :-) Although it still looks good to me in the picture, only the crust maybe a little too dark / dry. Angelika

Oh I meant more my conversion from grams into other things. I think the difference in ingredients may have done it for the top layer but I think even following the exact same recipe I've pinpointed a few things to do differently that I think will have a better result. Do you mind if I post it once I've tried again?

Not at all, go ahead and post it. I have it from a newspaper where a bavarian farmer's wife sent it, I guess she won't mind (and never know) her recipe making it across the Atlantic :-)