I am always on the hunt for a new apple recipe, and when I decided to make the quark recipe from Slow Cook Modern, the hunt became a hunt for a recipe for apple and quark. I have encountered recipes calling for quark before, usually from Germany, and was excited to try this soft cheese. The end result was good, halfway between a cheesecake and a custard, at least how the recipe turned out with the quark mixed in with other things.

In the slow cooker, the recipe called for one ingredient - 1/2 gallon of buttermilk, which you cook on low for 2-8 hours, until the curd starts to set and separate from the whey. Mine cooker for 3.5 hours before I decided it was ready; I'm not sure if I should have left it longer but didn't want to overcook it. Then it went into a cheesecloth lined strainer for another 4 hours. Then the solids went into the fridge overnight, because I was going apple picking the next day. 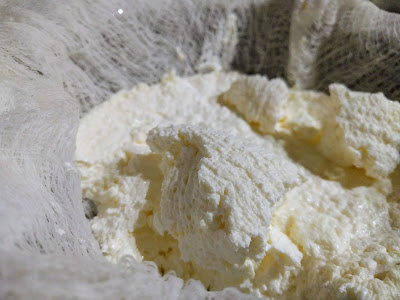 Hendersonville, NC, is only about 45 minutes north of where we live. There is a magical road between it and Chimney Rock, NC, called Chimney Rock Road. It contains apple orchard after apple orchard. We've tried several places along there, and really like the apple selection at Granddad's Apples n' Such. It was packed full of people this weekend with long lines for the bakery and the apple line. I was relieved to find my favorite baking apple - the mutsu - in abundance. Last year I waited too long and they didn't have any. 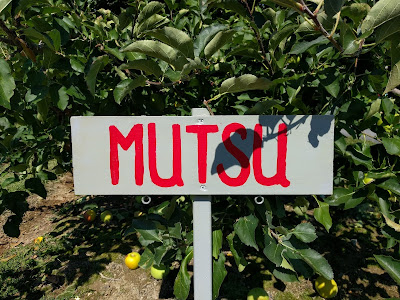 Quark - check. Apples - check. I guess I had everything I needed! 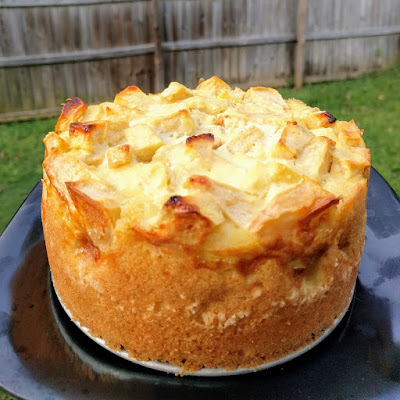 Since quark is a German ingredient, the best recipes I found were also in German. I also discovered I only had a smaller springform pan, having thrown mine away because it no longer closed. So this was a big risk, both using Bing to translate a recipe and attempting to cut it in half. I'll leave the recipe with the same amounts as the normal recipe, and you can picture me cutting eggs in half. 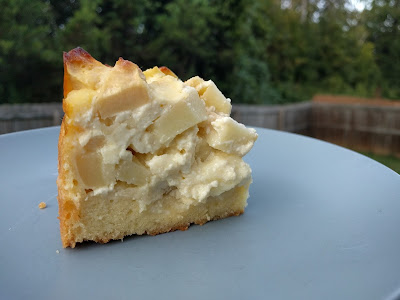 1. Butter and flour a 9" springform pan and chill in fridge while making the crust. Preheat oven to 350 F.
2. Cream butter and sugar. Stir in eggs and don't worry about curdling.
3. Sift flour and baking powder and mix into the butter mixture. Stir in the milk. Transfer to springform pan and pull up slightly along the edge using a small spatula or spoon. Put back in fridge.
4. Zest the orange and squeeze it for juice. Blend orange juice, vanilla, cornstarch, sugar, eggs, and quark until smooth.
5. Peel, quarter, and core the apples, then dice. Mix with quark mixture and spread on crust.
6. Bake about 50 minutes. If it browns too quickly, cover with foil.
7. When baked, rest at least 10 minutes before removing from the mold. Sprinkle as desired with powdered sugar. 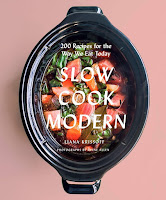 This post is sponsored by ABRAMS Books, as part of the ABRAMS Dinner Party, well, partly. I was provided a copy of Slow Cook Modern, which is where the quark recipe comes from, but I found the cake recipe elsewhere.

I did make the eggplant tian with olive marinated mozzarella from Slow Cook Modern, the same weekend as this cake. 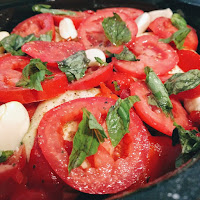