I have long been intrigued by vinegar in desserts, ever since making my Grandma's pie crust recipe for the first time. She calls for vinegar, which I would later learn helps prevent the formation of gluten (and allowing for a flakier crust.) I have experimented with roasting strawberries with balsamic and using them with crepes for breakfast, mashed into sauce for pound cake, even turning the flavors into ice cream. My favorite pavlova has a tiny bit of balsamic vinegar, balancing the other flavors and adding depth.

I was asked this year to participate in the ABRAMS Dinner Party, so you will see a series of posts with recipes from their cookbooks. But of course, this is a baking blog, so when the first book was Acid Trip by Michael Harlan Turkell, I knew it would be fun to focus on the dessert aspect. I still really want to make the recipe for vinegar pie, but my tart pan is missing its middle at the moment.

Instead I was drawn to the zabaglione recipe. Traditionally, zabaglione (also sometimes called sabayon) is made with egg yolks, sugar, and wine. This recipe had fruit marinated in vinegar and vinegar in the custard. I was uncertain if it would work and that's why I had to try it! During my brief year of restaurant work, I spent the month of May making sabayon (featured for Mother's Day brunch but also served as a dessert special), so I knew the technique. With this recipe, the custard is much darker in color because of the balsamic, but by the time it has been whipped to coolness and the whipped cream is folded into it, the color is quite light.

I'm going to make a few notes and recommendations to the recipe below, so keep reading! 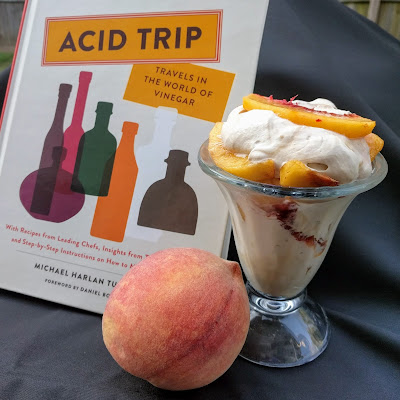 In a medium bowl, toss the peaches in the champagne vinegar and marinate for an hour in the fridge.

In a stand mixer, whip the heavy cream until soft peaks form, about 5 minutes. Transfer the whipped cream to a bowl and reserve in the refrigerator.

Fill a medium saucepan halfway with water. Heat the water until it comes to just under a boil - you want a good amount of steam. Maintain medium heat on the pot for the steam.

In a medium bowl, combine the balsamic vinegar, honey, egg yolks, and lemon zest. Place the bowl over the saucepan (it shouldn't be touching the water) and begin whisking. Rotate the bowl while whisking to ensure all the sauce is being moved.

After 5 to 7 minutes, the zabaglione should have almost doubled in size - if you run your whisk through it and the trail holds in the zabaglione, you're done. Remove the custard from the heat and whisk vigorously until it is cool to the touch.***

Fold the whipped cream into the zabaglione. This will help keep its structure and add great texture and body. Reserve in the refrigerator or immediately spoon over peaches.

Jenny's notes:
* - I sliced the peaches instead of halving them, but this means there is more vinegar flavor. If you slice, use less vinegar. This will be best with fruit that is ripe and sweet, because that balances the other flavors.
** - If I made this again, I'd either not marinate the fruit in vinegar or just sprinkle.
*** - To save your arms, just hook it back up to the stand mixer you used for the whipped cream. Set the timer for ten minutes and check back. If the bottom of the bowl is cool, you can move on to the folding step.


This post is sponsored by ABRAMS Books, as part of the ABRAMS Dinner Party
at 7:29 AM