Baking and Cooking with Julie and Julia - Souffle L'Orange 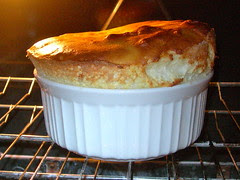 Souffle L'Orange
Originally uploaded by watchjennybake.
The movie Julie and Julia comes out this weekend, the movie that was based on the book Julie and Julia, which was based on The Julie/Julia Project blog from 2002, which was devoted to cooking all the recipes in Mastering the Art of French Cooking by Julia Child, a cookbook whose process is chronicled in My Life in France, also by Julia Child. What foodie wouldn't be excited about this string of books and movie, and a gathering seemed inevitable. 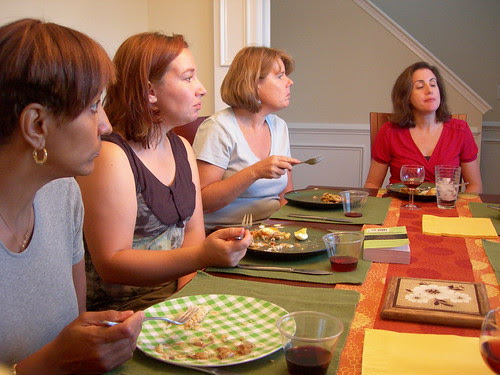 I e-mailed some friends earlier this summer, proposing a book/movie/cooking club, a one-shot thing, where we would read Julie & Julia, meet to talk about the book and eat Julia Child food that we were inspired to try making, and then later on go and see the movie. Last night, seven women came over, Julia Child recipes in one hand and Julie & Julia in the other. We dined on cold stuffed eggs, two quiches, one with swiss and one with eggplant. Also coming from one woman's garden was ratatouille along with what Julie Powell deemed "Bitch Rice," because of the seemingly ridiculous complexity in preparing rice. One person made Julia Child's recipe for Coq au Vin, which seemed quintessentially Julia to me. 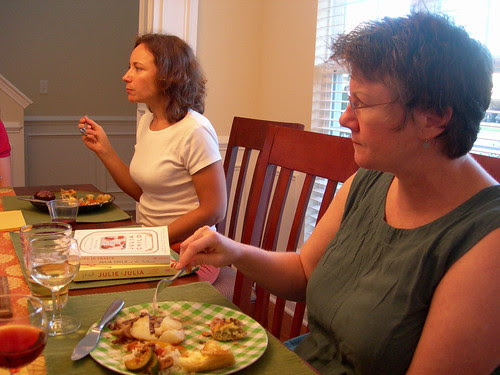 For dessert there were these amazing Chocolate Cups with Wine-Poached Peaches, definitely my favorite of the night. I had made Reine de Saba Cake in case my souffle flopped, but I did a trial one Friday night just to see if it would work. The picture at the beginning of the entry is of the original Friday night souffle, because I completely forgot to photograph the second one.

I had not made a souffle before, but in My Life in France, Julia Child mentions the Grand Marnier souffle several times, including making it on Christmas Eve as a tradition. I thought I'd attempt it first, since chocolate sounded more problematic (since chocolate is heavy). The recipe is technically Souffle L'Orange, and comes from volume 1 of Mastering the Art of French Cooking. What I love about Julia Child's recipes is that while they are often complicated with steps that sometimes seem unnecessary, I felt like she was standing in the kitchen with me, allowing me to fail if I wanted, as long as I tried it (but also feeling like I wouldn't, since she'd written down exactly what she wanted me to do). Julia became an expert, the authority, but she didn't even start learning to cook until she was 37. So why couldn't I make a souffle?

Well, I could! I wasn't sure what a souffle even tasted like, so I turned to my friends at Cooks Illustrated, who say that "At its best, a soufflé rises dramatically above its rim to create a light but substantial and crusty top layer cushioned by a luxurious, creamy center that flows slowly across the tongue, richly saucing the taste buds. The contrast between exterior and interior is the essence of a great soufflé." Okay, so creamy and crusty, luxurious and light. Easy. :P

The recipe starts with what I'll call a sweet roux, although Julia calls it a bouillie. She had me massage an orange with sugar lumps, so I did, feeling ridiculous, but I think it helps release the oils before zesting. All in all the process wasn't very time-consuming, although there is always the precarious balance between mixing everything well enough and overmixing as you fold in the whites. I did less than I thought I should, because I was so afraid I wouldn't get the lightness. The first one I made rose considerably above the pan, but the one I made last night was even better. 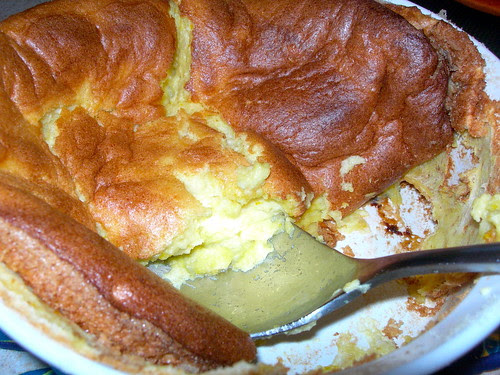 After it has been cut into, or even as it cools, a souffle starts to deflate. But you can still see the contrast between airy and custardy, crusty and creamy. It was ethereal. I used that word after trying it Friday, and one of the people at the table used it to describe it last night. It hits your tongue and then melts away, leaving the essences fo the flavor you have made. And for a French recipe, it isn't as bad calorie wise as some of the other recipes might be, making it the ultimate indulgence.

I'm not going to type up the recipe here. Almost everyone has Mastering the Art of French Cooking on sale now. It should be a staple in every kitchen, yes, even mine, the vegetarian. I didn't think so until I looked through it and started making some of the recipes. They are complex but not impossible, with delicious, well-tested results. As Julia would say, Bon Appétit!

Sounds like a wonderful party! Can't wait to see the movie!

What a lovely idea. I wish I had that many foodie friends who love Julia Child as much as I do. I'll just live vicariously through your catch ups! :)

what a fun idea! i love the book and can't wait to see the movie. looks like your souffle went great! my only experience with one was during a college cooking class, and my group had to do a spinach souffle, while everyone else did cheese or chocolate. of course the spinach weighed it down. :(

I am not quite up for cooking like Julia at this stage of my life, so I'll have to live vicariously through you :)

Right now I am reheating a crockpot roast beef...... there is something VERY un-Julia about that.

I loved the movie and it reminded me that I used to make her souffles and I did it well. You have inspired me to try again. Thanks